Top
You are here: Home / Bloom News / Fibroids 101 – What are fibroids anyway?

What are uterine fibroids?

Uterine fibroids  – also known as leiomyomas or myomas – are benign (not cancer) growths that develop from the muscle part of the uterus. The size, shape, and location of fibroids can vary greatly. They may be inside the uterus, on its outer surface or within its wall, or attached to it by a stem-like structure called a peduncle. Some women may have only one fibroid and others may have many in various sizes. A fibroid may remain very small for a long time and suddenly grow rapidly, or grow slowly over a number of years. 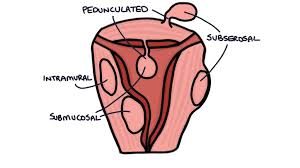 Who is most likely to have fibroids?

What are symptoms of fibroids?

Fibroids may cause no symptoms at all.  They may be found incidentally during a routine pelvic exam or during a pelvic ultrasound for other problems or pregnancy.

Fibroids may also have the following symptoms: 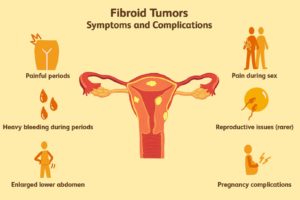 What complications can occur with fibroids?

Fibroids that are attached to the uterus by a stem may twist and can cause pain, nausea, or fever. Fibroids that grow rapidly, or those that start breaking down, also may cause pain. Very rarely, they can be associated with cancer. A very large fibroid may cause swelling of the abdomen. This swelling can make it hard for your doctor to do a thorough pelvic exam.

Fibroids also may cause infertility, although other causes are more common. Other factors should be explored before fibroids are considered the cause of a couple’s infertility. When fibroids are thought to be a cause, many women are able to become pregnant after they are treated.

How are fibroids diagnosed?

Fibroids are often diagnosed during a pelvic exam in the office.  A number of other tests may show more information about fibroids:

Imaging tests, such as magnetic resonance imaging (MRI) and computed tomography scans (CT scans), may be used but are rarely needed. Some of these tests may be used to track the growth of fibroids over time.

When is treatment necessary for fibroids?

Fibroids often do not require treatment.  If they are not causing symptoms, are small in size, or occur near menopause then you likely will not need treatment.

Certain signs and symptoms may indicate the need for treatment:

Can medication be used to treat fibroids?

Medications may reduce heavy bleeding and pain that fibroids sometimes cause, however they may not prevent their  growth over time. Surgery is sometimes necessary to remove fibroids in some women.

Here are a few examples of medications that can be used to help treat symptoms related to fibroids:

What types of surgery may be done to treat fibroids?

Myomectomy is the surgical removal of fibroids and leaves the uterus in place. Fibroids usually do not regrow after surgery, but new fibroids may develop. If they do, more surgery may be needed.

Hysterectomy is the removal of the uterus. The ovaries may or may not be removed at the same time as the uterus. Hysterectomy is usually done when other treatments have not worked or are not possible, when the fibroids are very large, or if a woman is no longer interested in having children.

Are there other treatments besides medication and surgery?

Other treatment options are as follows:

Do you have fibroids or do you have symptoms that might be attributed to fibroids?

Call Bloom Ob/Gyn at 202-449-9570 to make an appointment with one of our health care providers!  Through a simple office exam and ultrasound we can help counsel you about your options. 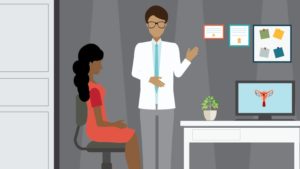